Discover the Benefits of ECP 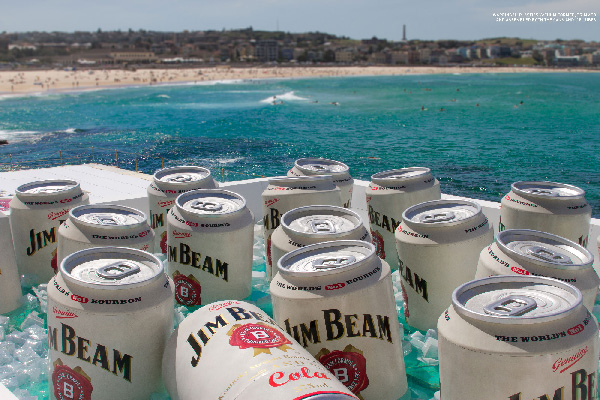 In February Warringah Plastics was commissioned by Big Kahuna Imagineering – leading Sydney Models and Special Effects Creators, to manufacture a promotional product like no other!

What We Did
Our part was to vacuum form and fabricate 33 giant cans protruding out of the water and 2 full cans lying on their side surrounded by over 120 sheets of vacuum formed ”ice block” panels.

The half cans consisted of a vacuum formed top made from high impact acrylic, the sides were made from polycarbonate sheet wrapped around and fastened to steel rings. The construction was designed to be airtight to assist with the cans floatation in the pool. The full cans were of similar construction except they had a special vacuum formed base. The ice cube panels were vacuum formed in clear PETG material and were designed to float in water.

We were on a very tight deadline to complete the project as shooting was scheduled late in March. In a Mission Impossible-like scenario in just 48 hours the pool had to be drained, the cans and ice had to be carefully placed into position, the commercial had to be shot and everything needed to be put back just how it looked.

Working closely with Big Kahuna we managed to achieve the deadline with the help of our skilled staff who served long hours to get everything out the door. This was a very challenging project as there was no time to experiment; as we say at Warringah Plastics measure twice, cut once. Full credit must be given to our professional team who succeeded beyond measure in this endeavour.

When businesses employ Warringah Plastics as their plastic designer and manufacture they have peace of mind knowing that we are committed to their success. Whilst many plastic companies would gasp at such an undertaking, it is projects like this that we thrive on as we like a challenge every now and again – so when we say no projects too big we mean it! Having one of the largest vacuum forming machines in Australia the design possibilities are endless for promotional and novelty projects. Check out the finished ad below:

Interest in our last newsletter which showcased our involvement with the vacuum forming of giant cans and ice cubes that were used in the recent Jim Beam advertisement campaign at Bondi was so overwhelming that we decided to share with you some ‘behind  the scenes’ footage, courtesy of Big Kahuna Imagineering. Big Kahuna Imagineering had the mammoth task of overseeing the entire installation, including the pool-to-esky conversion. Check out the time lapse on Youtube by clicking the image above. Here is an excerpt from the Big Kahuna’s blog :

“It was a mammoth week for Big Kahuna Imagineering converting Bondi Icebergs’ 50-metre Olympic pool into one giant Jim Beam esky for the final part of the bourbon brand’s international TVC — and it’s not over yet!

Loading in more than 30 tonnes of materials including over 2,500 custom-fabricated and gang-moulded ice cubes as well as 31 cans of Jim Beam standing 2m-wide and 2.8m-tall down a winding path, over two balconies and down a flight of stairs… only to carry it all back up by hand less than 24 hours later… this was certainly a project of Titanic proportions!

B&T’s got the scoop on the $10 million campaign and gave BKI a much-appreciated mention for the part we played (still playing!)”